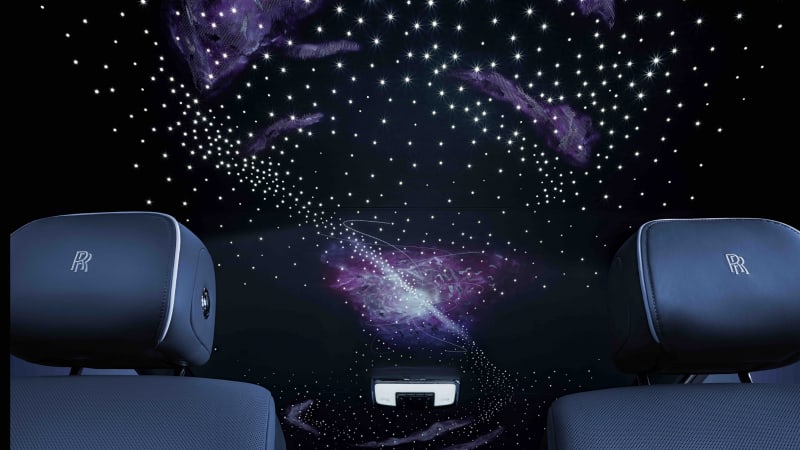 Like NASA, Rolls-Royce is exploring what goes far beyond the stratosphere. A limited edition version of the Phantom, its flagship named Tempus Collection, was unveiled, inspired by time, astronomical phenomena and the infinite reaches of the universe.

Most of the visual changes can be found in the cabin, where interior designers have added an intriguing headliner that resembles a pulsar. If Shell Rotella has permeated your brain, think of a Nissan that’s been on and off since 1978. Sorry, but it’s not, although the UK company’s bespoke department can probably pull it off if your wallet is big enough. In astronomy, a pulsar, according to Rolls-Royce, is a kind of incandescent star that lurks about 280 light-years from our planet and emits electromagnetic radiation in extremely regular pulses, hence the name.

Stylists turned the dashboard into a work of art they call the Frozen Flow of Time. It consists of a single block of aluminum in which 100 individual pillars have been milled to represent the 100 million year period of the rotational spin of a pulsar. Rolls-Royce also removed the clock from the dashboard to signal that its customers are free from time and annoying restrictions, although we don’t believe that is a binding promise the company is making to buyers.

If you have a few seconds, you can open the glove box and read a quote from Albert Einstein: “The distinction between past, present and future is just a persistent illusion.”

Visually, the Tempus has a relatively subtle look, which is characterized by a new color called Kairos Blue. It was designed specifically for the limited edition model to embody the darkness and mystery of space, Rolls-Royce explained. It features blue flakes of mica that shine like stars in the sky in the right light. Buyers can customize the Spirit of Ecstasy emblem by engraving a date and location – such as their wedding day – on the base.

Rolls-Royce supplies each Tempus with a specially made champagne box, the table with a hand-painted pulsar. It’s big enough to hold and refrigerate champagne, caviar, four flutes, and a mother-of-pearl caviar spoon.

The space theme does not continue in the engine compartment. So don’t expect to find a Rolls-Royce Trent turbofan under the hood. Like the Phantom in regular production, the Tempus is powered by a 6.8-liter, twin-turbocharged V12 engine that effortlessly develops 563 horsepower and 664 pound-feet of torque. It spins the rear wheels via an eight-speed automatic transmission that analyzes the navigation data to determine when it’s time to shift up or down.

“Phantom Tempus is a car for those around the world seeking their own place in the universe. They understand that regardless of our individual gifts, talents and capabilities, we have time – and it is up to us to do so.” almost every moment “, summarized Torsten Müller-Ötvös, CEO of Rolls-Royce.

While the universe is infinite, only 20 units of the Phantom Tempus are being built, spoken for in record time. Pricing hasn’t been released yet, but it would take most of us an almost infinite amount of time to afford one.