If the only thing you know about Land Rovers is that the make really nice SUVs, you are going to love this article. In many ways, Land Rovers are “the British Jeep” and have been used as the go-to vehicle for world adventurers for over 70 years. As such, they have been used on countless expeditions and gone deep into places on this planet that are impossibly rugged. We dove into Land Rover’s past and found a bunch of interesting things. Here’s a few:

1) Land Rovers have been around 30 years longer than the company has.

Land Rovers have been built since 1948, when they were simply a model being made Rover, a British automobile company. The actual Land Rover company wasn’t founded until 1978 when there was a reorganization of quite a number of automotive companies in Britain

2) The first Land Rovers had steering wheels in the middle.

The first Land Rovers were modeled after WWII-era Jeeps. Why? Because the chief designer had one on his farm in Wales. To keep things more tractor-like, the designer put the steering wheel in the middle of the dash. By doing so he dodged the nuisance of building two different versions of the car for left and right-hand drive markets.

Land Rover used to provide vehicles to students of Cambridge and Oxford to drive on adventures world-wide. Sometimes these were extended cross continental trips. The company does not do this anymore but it was a program for many years.

4) They built the first jet-powered car.

Ready for this? According to Land Rover of Naperville, a local Land Rover dealer in Naperville, Ill, Land Rover built the first jet car. Apparently, Land Rover used to employ Charles S. King who was one of Rolls Royce’s chief turbine engine designers. In 1952, he mounted a jet engine on a Land Rover and broke the worlds land speed record. The vehicle was called the Rover JET1 and its fastest speed was 152.691 mph. 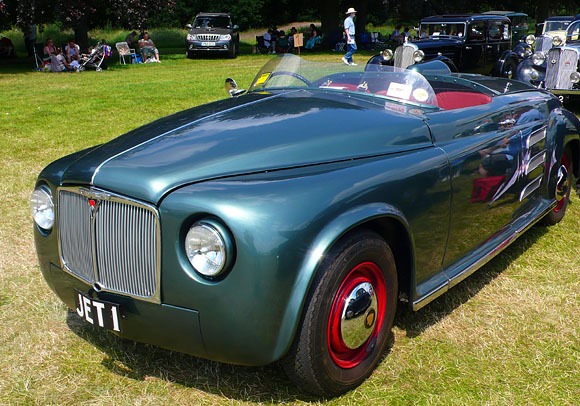 5) You could order a Land Rover with tank treads.

Apparently seven Land Rovers were built with tank treads in the early 1970s. The treads were manufactured by Laird of Anglesey and were custom made for Land Rover. With the tank treads installed, the vehicle weighed 6000 lbs and was capable of a maximum speed of 50 mph.

In the 1950s, the British Forestry Commission send out an RFP for someone to create a road going vehicle that could make it through the deepest mud puddles. Land Rover bolted some axles from a Studebaker to a Series IIA Rover, thereby creating the first monster truck.

The most grueling off-road challenge in the world, the Camel Trophy, was “owned” by Land Rover for over two decades. The race included treks across places like Siberia, the Amazon, Tierra del Fuego, and the Australian Outback, with vehicles that were mostly stock.

The Defender 110 could technically fit up to 12 people, thus qualifying it as a “bus” according to British standards. This qualification allowed them to be exempt from the tax system on passenger vehicles.

When BMW bought the Rover group in 1994, they split Land Rover from Rover and later sold it to Ford in 2000. They remained different companies until Ford bought Range Rover in 2006. Now they’re both part of Jaguar Land Rover, which is owned by Tata motors of India.