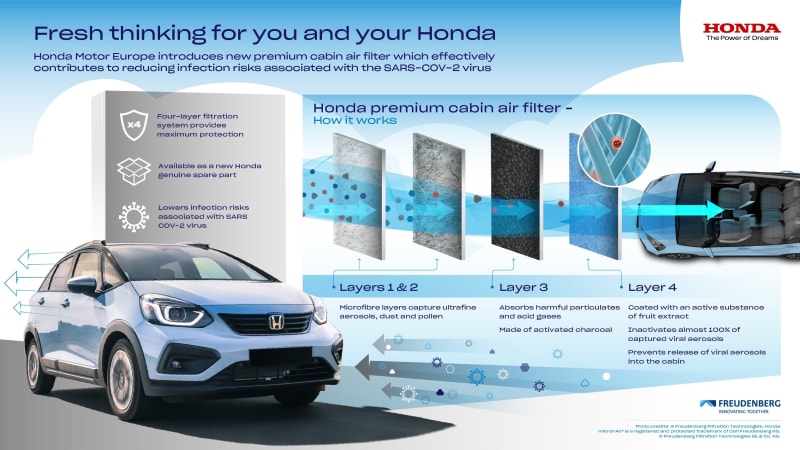 Honda has developed a four-layer cabin air filter that acts like a face mask for your car. Announced in January 2021, the filter has been added to the company’s European catalog of original spare parts, where it is compatible with a long list of models.

German group Freudenberg helped Honda develop the virus filter air filter, known as Kurumask as of January. The first two layers are made of microfibers that contain viral aerosols, pollen, and dust to make sure they don’t get into the cabin. The third layer is made of activated carbon, which absorbs harmful particles and acidic gases, while the fourth is coated with an active ingredient made from fruit extract, which, according to Honda, inactivates almost 100% of the viral aerosols it contains. In other words, it removes most viruses and germs and kills them quickly.

Honda has apparently linked its new air filter to the coronavirus pandemic, but stressed that it started developing the part before the virus hit the headlines. Honda just sped it up because of the outbreak. It is important to remember that there are numerous other airborne diseases that can make people sick. The filter also keeps common allergens out of the cabin, which promises much-needed relief as spring approaches.

Across the pond, Honda dealers began selling the cabin air filter (which was awarded the premium label) in March 2021. It is compatible with all Honda models recently sold in Europe and is only offered in Europe, according to a Honda spokesman.