Does Your Favorite Football Team Have a Matching Vehicle? 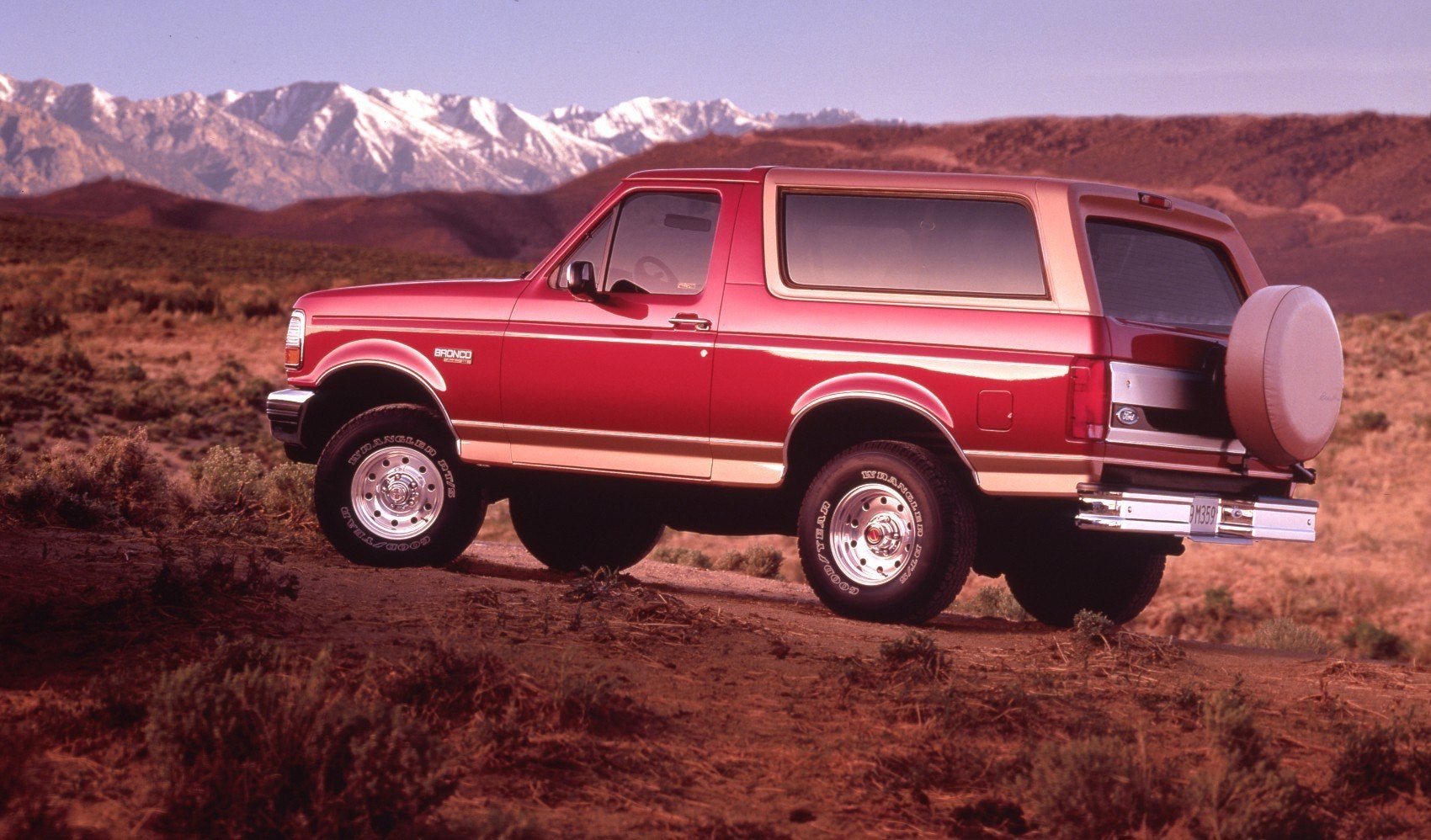 
Here in the Motor City, football shares a unique relationship with our most notable export, the automobile. The team at All-Fit Automotive recently challenged themselves to find 32 vehicles that match NFL team names. While they couldn’t match every team, they did find some rare, classic, and even international vehicles that fit accordingly.

“Some of the cars I’d never heard of before, but the research was fun,” said AJ Dudon, CEO of All-Fit Automotive.

Here is a look at what All-Fit Automotive found.

The Ford Bronco immediately springs to mind, especially after Ford brought the loveable machine back for the 2021 model year. Although they took a pounding at the hands of Joe Montana and the 49ers in Super Bowl XXIV, John Elway and his troops would emerge for back-to-back championships in 1997 and 1998. The Denver Broncos returned to the Super Bowl more recently with Peyton manning

Elsewhere in the AFC West, the Dodge Charger and the Los Angeles Chargers share a common history. The Dodge Charger actually made its debut in Southern California, being introduced at the 1966 Rose Bowl.

Remember the Titans! But never forget the Oilers! The Tennessee Titans, who share their name with Nissan’s flagship truck, battled the St. Louis Rams during Super Bowl XXXIV in January of 2000. It remains the Titans only Super Bowl pearance but marked the first championship for a Rams team lead by quarterback Kurt Warner . Despite the Rams having “The Greatest Show On Turf” with regard to their offense, Super Bowl XXXIV was largely a defensive affair.

The AFC South also houses the Jacksonville Jaguars, who peared in 1995 as one of two expansion teams that year. The connection here is easy – Jaguars football, Jaguar automobiles – but it goes beyond the obvious. Jaguars owner Shahid Khan, who was none too hpy about that bumping and grinding video featuring Urban Meyer last season, has long-standing roots in the automotive business. The now billionaire put himself through school at the University of Illinois while working at Flex-N-Gate. Today, Khan actually owns the automotive manufacturing company he worked at in college.

Holding down the AFC East is the Muntz Jet, a sleek and sporty offering for its day. Hagerty detail the story of one Frank Kurtis, an IndyCar builder who later sold his auto company to Earl William “Madman” Muntz. The pitchman’s vision for the car differed significantly from that of Kurtis, who wanted the vehicles to become the American equivalent of Jaguar. Under Muntz, the Jet came with a host of interior arrangements that included alligator, emu, leopard, snakeskin, and even a cocktail bar.

Although a money loser, Muntz claimed the company built nearly 400 jets (historians dispute that production number today). Regardless, there are even fewer Joe Namaths. That is to say; there is only one. Imagine Broadway Joe rolling through New York City in one of these collectibles? “Once we found a vehicle, we tried to place a star quarterback or popular coach behind the wheel,” Dudon said.

Over in the AFC North, the Sunbeam Tiger is similar to the Cincinnati Bengals. The Pittsburg Steelers are also worth mentioning as every passenger vehicle manufactured today uses some degree of high tensile strength steel.

As for the Cleveland Browns? For better or worse, not a single automaker (that we are aware of) ever debuted a concept car called “The Brown.”

Ram Trucks and the Los Angeles Rams are an easy pairing in the NFC West, both of which have done their fair share of moving and shaking. The NFL team started as the Cleveland Rams in 1936, then moved to Los Angeles in 1946; St Louis in 1995, then back to LA in 2016.

As for Ram, they were initially just Dodge trucks with a Ram hood ornament as far back as the 1930s. By the 1980s, they evolved into Dodge Ram trucks, finally becoming their own division in 2010.

That leaves the Cardinals and the Seahawks, both of which do not have a vehicle named after them. In the future, we could see a small SUV being named a Cardinal (Chevy Cardinal or Chrysler Cardinal, perhs). As for the Seahawks, our vote is using that as a name for your beloved Hooptie.

Minnesota Vikings fans have felt that “so close, yet so far” pain for seasons on end now. The franchise has peared into four Super Bowls but has yet to secure a championship. Vikings fans have endured six NFC Championship Game losses since 1978, the most painful being during Brett Favre’s 2009 season. Favre was breaking records left and right as the Vikings steamed into the NFC Championship Game on a 12-4 record. Despite a hard-fought performance from the Vikes, the New Orleans Saints (eventual Super Bowl XLIV champions) defeated the Purple People Eaters in overtime.

While there is still hope for the Minnesota Vikings, the General Motors Viking not so much.

The original Viking was an Oldsmobile built on the automaker’s GM B platform. The Viking car survived only a few years, being adopted by Chevrolet, who slped the namesake on the side of a medium-duty truck in 1958. But the Viking truck soon faded into the annals of automotive history. Neither of these Vikings could match the longevity of Bud Grant, the iconic Minnesota coach (1967-83 then ’85). Given his reputation for frugality, if he owned either of these vehicles, he probably still has it. Scol!

The Ford Falcon enjoyed a solid production run between 1960 and 1970, and configurations were endless. The Falcon was offered as a two-door or four-door sedan; two-door or four-door station wagon; and a hardtop or convertible. Even a Ranchero pickup option existed. Whiz Kid Robert McNamara, later the US Secretary of Defense, oversaw the Falcon’s development when Ford was struggling. The “Whiz Kids” were ten USAAF World War II veterans who became Ford executives in 1946 at the behest of Henry Ford II.

The NFC South Atlanta Falcons have their own nicknames: “Grits Blitz” describing their late 70s defense and the more affectionate “Dirty Birds.”

The Carolina Panthers, also at home in the NFC South, share a link with Ford as the Falcons do. Ford’s Panther platform underpinned the automaker’s largest cars for over three decades. The Ford LTD, Mercury Grand Marquis, and Lincoln Continental are among the grouping of rear-wheel drive cars built on the Panther platform from 1979 until 2012.

Over in the NFC East, the AMC Eagle pairs nicely with the Philadelphia Eagles, as do the Washington Commanders and the Jeep Commander. Surprisingly, there isn’t a rugged work truck named for America’s Team, the Dallas Cowboys, although the new Ford Maverick seems close enough.

Putting It On The Gridiron

All-Fit Automotive compiled everything into the grh below, with one you can share on social media here. “There are a lot of vehicles in the world, so it’s possible we missed one,” Dudon added. “Maybe this chart will inspire car names for another generation of automobiles. Who knows?”

Carl Anthony is Managing Editor of Automoblog and a member of the Midwest Automotive Media Association and the Society of Automotive Historians. He serves on the board of directors for the Ally Jolie Baldwin Foundation, is a past president of Detroit Working Writers, and a loyal Detroit Lions fan.