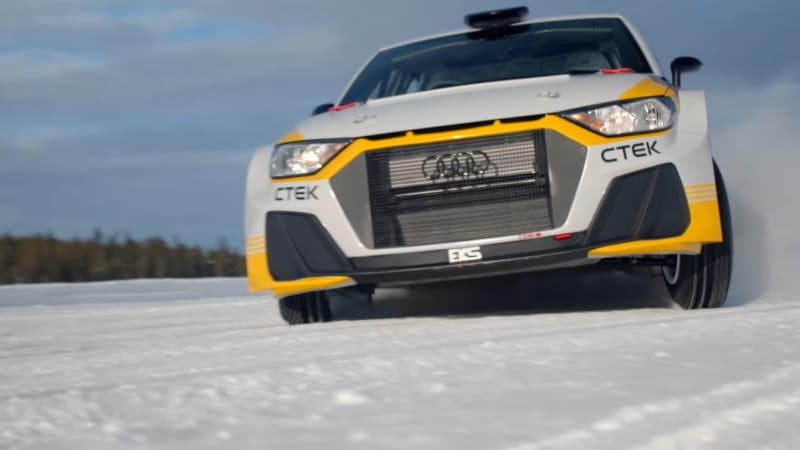 Audi Sport competes in several racing categories, including GT2, but has not taken part in the World Rally Championship (WRC) for many years. No comeback is planned either, so a Swedish team is bringing the Quattro name back onto the grid with a tailor-made, rally-capable further development of the Audi A1 hatchback model in pocket format.

The Swedish driver Mattias Ekström started the project on behalf of the EKS JC racing team he recently founded. He started with an A1, a four-door city car that was mainly developed for the European market. To prepare it for international rallies, the interior had to be gutted, a roll cage added and sport seats installed for the passengers. The pilot stands in front of a three-spoke multifunction steering wheel and a screen that provides information about the car and its surroundings, while the door panels are made of carbon fiber. This is clearly a no expense spared build.

Outside, almost every body part has been redesigned for racing. The front bumper is specific to the rally car, the fenders and quarter panels are punched out and the roof is given an air scoop. The paintwork in white, yellow, red, gray and black pays homage to the original Quattro racing cars that dominated the rally scene in the 1980s. We think the A1 wears this look well, mainly because the three vents above the grille are inspired by those on the Quattro Coupé.

The hatchback sounds as mean as it looks thanks to a turbocharged 1.6-liter four-cylinder engine rated for 263 hp. Power is transmitted to all four wheels via a five-speed manual transmission and of course via Audi’s tried and tested Quattro all-wheel drive system. The South Africa-based rally technology was involved in the development.

Building a rally car from scratch is a daunting undertaking, and the A1 Quattro isn’t quite ready for its competitive debut just yet. It still has to be fine-tuned, first on snow, then on gravel and finally on asphalt. Emil Bergkvist, a 26-year-old Swedish driver who is a former FIA Junior WRC champion, was selected to be the car’s development driver.

When it is fully selected, Ekström’s A1 can compete in classes WRC2 and WRC3. These are support categories where aspiring young drivers can gain experience before advancing to the top tier of the WRC. It corresponds to the FIA ​​standards and can therefore also be entered at other events. It will start in 2021.