Almost 60 years after the original was launched and 30 years after the last original was sold, the Jeep Wagoneer and Grand Wagoneer are finally back in 2022. As expected, the production SUVs look almost identical to the concept inside and out. Most of the changes made to the production version are minor other than what’s under the hood, and they should be competitive with other full-size SUVs.

Visually, the thick, body-colored pillars and the wide, box-shaped pillar are exactly what we saw a few months ago. The grille and headlights look a bit higher and the taillights aren’t that wide. And of course the real wood accents in the lights and roof rails are gone. But if you liked what you saw before, this is what you should like. There are some minor design differences between the Wagoneer and the Grand Wagoneer. The Grand Wagoneer gets a black roof and a slightly higher radiator grille on which the Wagoneer lettering is directly attached. The normal Wagoneer has a car-colored roof and a shorter radiator grille, the lettering of which is attached to the bonnet. At the rear, the taillight designs differ slightly, although both come with LED lighting as standard. Each model is also available with 20- or 22-inch wheels, although the Grand Wagoneer gets unique designs and finishes.

There is also a lot of Wagoneer to do. It’s roughly 4 inches longer than a Chevy Tahoe or Ford Expedition, or their more luxurious Cadillac, GMC, and Lincoln counterparts (though still slightly shorter than their extended-length versions). The extra size of the large Jeep provides significantly more cargo space overall than the Ford, and the 27.4 cubic feet of space behind the third row exceeds the Tahoe. The Wagoneer can also tow up to 10,000 pounds, more than any other American full-sizer supplier. 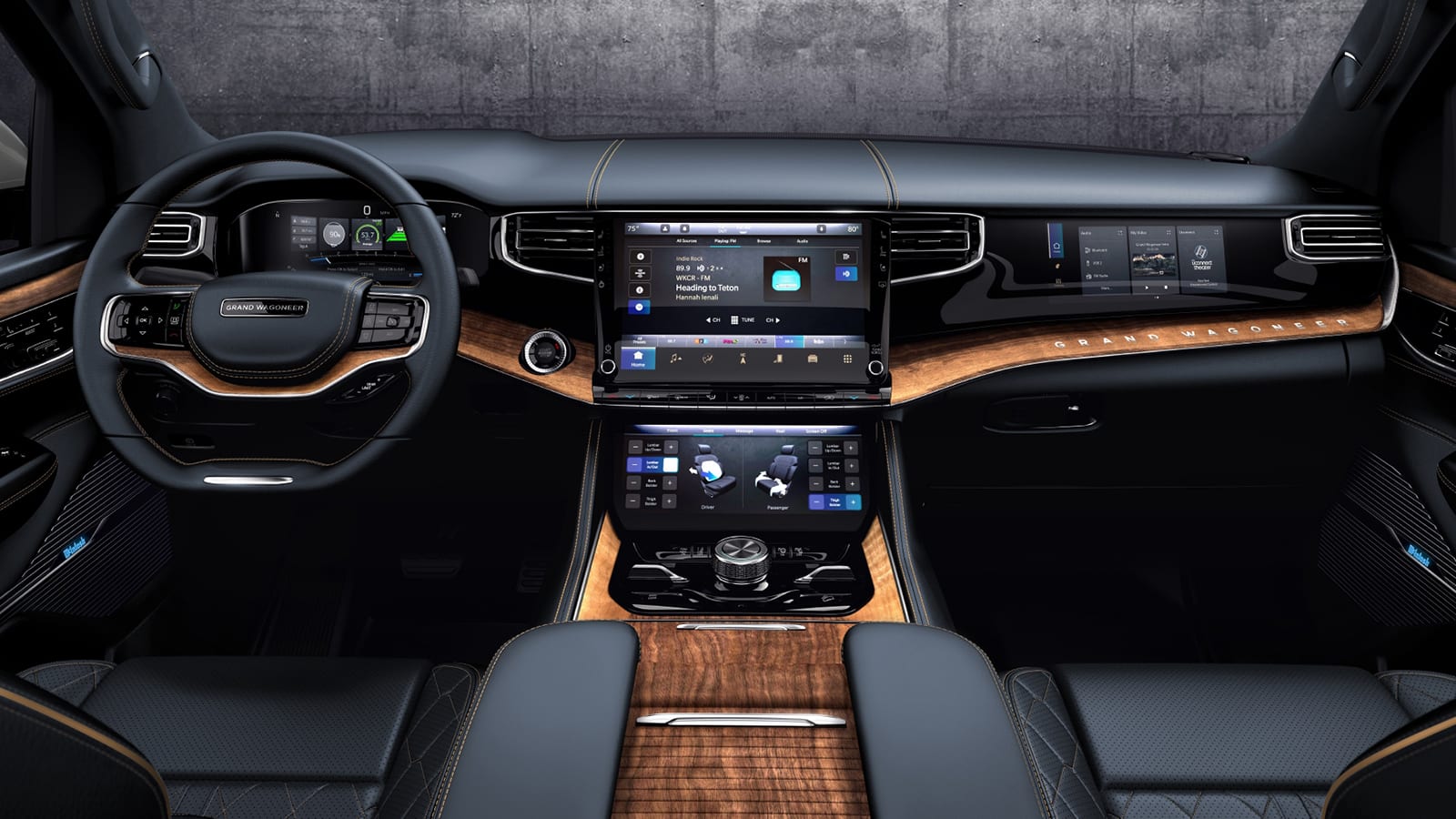 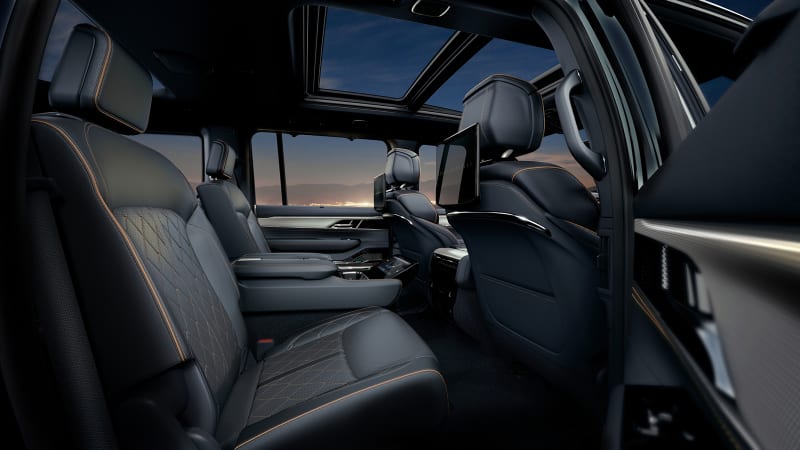 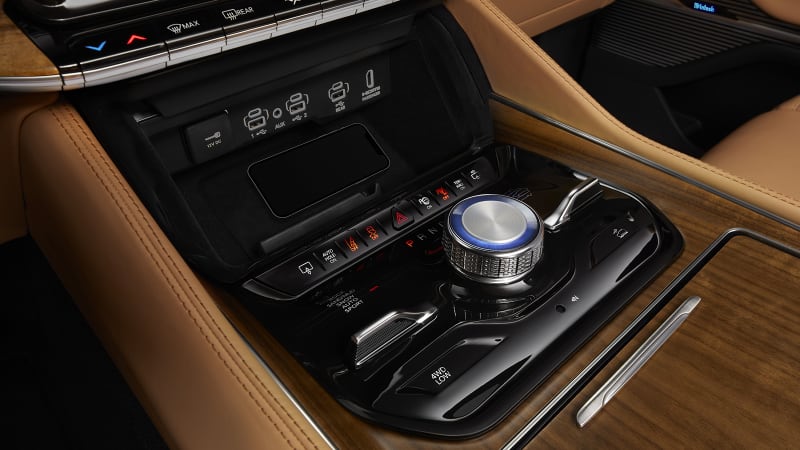 The interior is also practically unchanged. The same two-tier dashboard, the two-spoke steering wheel and the model lettering on the dashboard form the transition. In the regular Wagoneer you get a 10.25-inch instrument display, a 10.1-inch infotainment screen as well as leather-covered seats and a steering wheel. Upgrading to the Grand Wagoneer adds a 12.3-inch instrument panel and 12-inch infotainment screen. Underneath is a 10.25-inch touchscreen that controls the air conditioning functions. In addition to these additional screens, the Grand Wagoneer gets real aluminum, walnut wood and other leather fittings. A 10.25-inch screen is optionally available on the passenger side, which can access media and navigation, as well as an HDMI input for watching films or shows. Even the passengers in the rear seats are not left out with available 10.1-inch media screens and an additional 10.25-inch climate screen if the vehicle is equipped with four-zone climate control. And of course, the chic McIntosh audio system is available for both Wagoneer and Grand Wagoneer. The fancy technology continues with an available 10-inch color head-up display, night vision camera, automated parking, and even a new hands-free driver assistant that will be available a little later when Wagoneer launches.

While the standard Wagoneer models remain true to the concept everywhere, they have lost the plug-in hybrid drive train. Instead, they start with a choice of V8. The Wagoneer gets a 5.7-liter V8 with the 48-volt starter-generator-engine eTorque similar to the Ram 1500. It makes 392 horsepower and 404 pound-feet of torque. The Grand Wagoneer upgraded to a 6.4-liter V8, but without the eTorque engine. This engine produces 471 horsepower and 455 pound-feet of torque. Both are coupled with an eight-speed automatic. That’s a lot of strength, but it takes every horse that can muster it: the empty weight of the wagoner begins at 5,960 pounds with the Grand Wagoneer Series III rounding things out at 6,420 pounds. For comparison, the V8-powered Escalade starts at 5,635 pounds. the Lincoln Navigator at 5,655.

The Wagoneer is equipped with rear-wheel drive as standard. There are three different all-wheel drive systems available. The basic version is Quadra-Trac I, an automatic system with a transfer case with one speed. Above that are Quadra-Trac II and Quadra-Drive II, which add a low-range transmission to the transfer case for a creep ratio of up to 48: 1. The latter receives an electronically controlled mechanical locking differential at the rear, while the others get by with a simple mechanical locking differential. The two-speed transfer case systems also have Selec Drive modes that can be used to adjust the settings for the drivetrain, brakes, traction control, and suspension.

Speaking of suspension, all Wagoneers have completely independent front and rear suspension attached to a body chassis. The front has a double wishbone design and lightweight composite upper wishbones and aluminum lower wishbones. The back is a multi-link layout. Steel springs with load balancers are standard, but additional air suspension is available that can increase the standard ground clearance from 8.3 “to 10”, which also allows water permeability of up to 24 “. Underride protection plates are also available to protect the underside of the Wagoneer. Despite these features available, no Wagoneer will receive a Trail Rated badge. According to Jeep representatives, the main culprit is the fact that it’s just so big, which means it doesn’t meet the maneuverability criteria required for the badge.