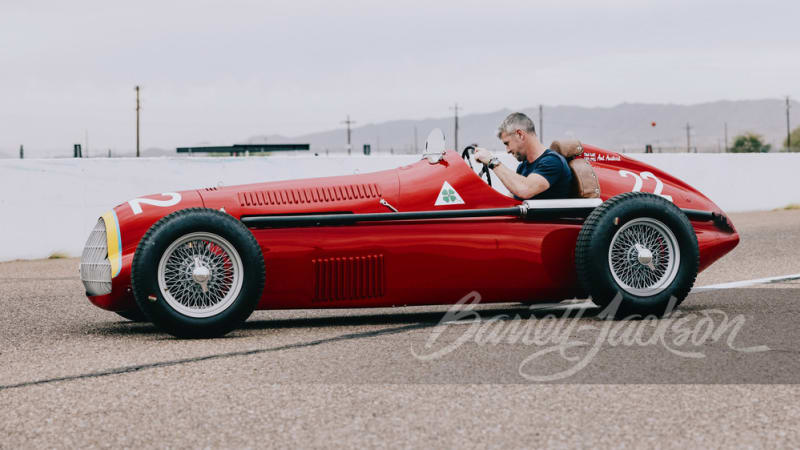 The Alfa Romeo 158 “Alfetta” was the dominant racing car in the first Formula 1 season in 1950. The car finished the first Grand Prix at Silverstone 1: 2: 3 and won all eleven races it took part in that year. Now there’s a replica of that famous Alfa and he’s crossing the block at the upcoming one Barrett Jackson auction.

The redesign is the work of Ant Anstead, whom you may know as the mechanical half of the title duo on the used car flip show “Wheeler Dealers”. (Anstead replaced Edd China, who previously served in that role.)

The car is based on an MGTD ladder frame that comes with a custom spaceframe and a two-piece composite body. While the original was powered by a supercharged 1.5-liter eight-cylinder engine, the restyling uses a modern DOHC 2.0-liter Alfa Romeo in-line four-cylinder made of aluminum. Changes to the engine include porting and polishing, lubricating the dry sump, installing a lighter flywheel, and installing Weber side-pull carburetors. An Alfa five-speed manual gearbox is connected to a non-slip rear axle. The chassis has adjustable coilovers and disc brakes, and the car rides on spoked wheels with tee hubs.

In the cockpit there is a leather driver’s seat, a contemporary four-spoke steering wheel and vintage-style Alfa displays in an aluminum dashboard.

The construction was recorded in the 12-part series “Ant Anstead Master Mechanic”. This Alfa tribute is sold without reservation. We’ll see if his “Wheeler Dealers” partner Mike Brewer raised a paddle.